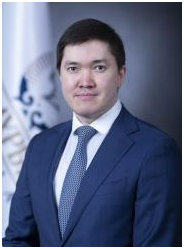 Member of the Board of Directors, Representative of the Sole Shareholder

Date of first election to the Board of Directors: April 26, 2021 (decision of the Management Board of JSC SWF Samruk-Kazyna No.17/21)

Citizenship — the Republic of Kazakhstan

From April 2011 to December 2012 – Project Manager, Project Office for the implementation of the Management Accounting System (MAS) of Samruk-Kazyna JSC

– From May 2019 to April 2021 – Project Manager at the international consulting company Whiteshield Partners (in different years he was Senior Analyst, Consultant)

– From April 2021 to the present, Co-Managing Director for Strategy, Sustainability and Digital Transformation of Samruk-Kazyna JSC

Part-time work and membership in the Board of Directors:

Ownership of company shares: none.

No shares of suppliers or competitors of the company