Infrastructure and Description of the Area

Alaigyr deposit is in Karagandy region, at the border and Karkaraly and Shet districts, 130 km south-east from Karagandy city. 60 km to the south-west the administrative center of Shet district, Aksu Ayuly village is located. The nearest settlements are Akshoky farm located 24 km to the west of the deposit. Distance from the railway Karaganda-Karagaily is 80 km away. Nearest mining enterprise Karagaily mine is located 80 km north-east of the deposit.

The deposit is located in the eastern part Uspensky Synclinorium (Uspensky crumple zones). The structure of the deposit area is involved by terrigenous-carbonate formations and spilite-siliceous-terrigenous formations of Tournasian-Famennian age, as well as coal-bearing parallel formation of subalkalic rhyolite porphyry of Early Permian age. It is lead mineralization in the area is associated with rhyolite subvolcanic bodies. The deposit extends into the sub-latitudinal direction 2850 m and conditionally divided into 3 sections: West – length of 1240 m (14 ore bodies), Middle – 700 m (7 ore bodies) and East – 770 m (11 ore bodies). Ore bodies are represented by steeply dipping lenticular deposits of vein-disseminated nest-lead ores.

The deposit is located at the foot of the northern slopes of the mountains Zhaksy-Karazhal (1088 m) and Alaigyr (1012 m) and is confined to low elevations with dissected slopes. The absolute marks within the area of the deposit varies from 865 to 930 m, the relative excess ores output over the bottoms reach 25-30 m. 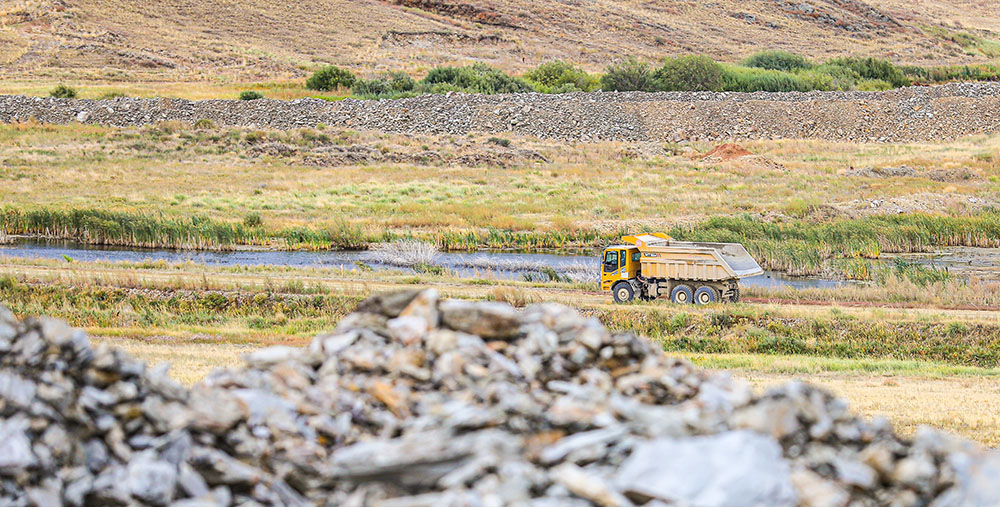 In 2012, JSC NMC Tau-Ken Samgik acquired a 100% stake in the authorized capital of JV Alaigyr LLP.

On February 20, 2013, a contract for the extraction of polymetallic ores at the Alaigyr deposit in the Karaganda region was signed between the Ministry of Industry and New Technologies and JSC NMC Tau-Ken Samruk. On May 16, 2013, by Additional Agreement No. 1 to the Contract, the subsoil use right was transferred to JV Alaigyr LLP.

In 2014, work began on the development of a feasibility study for the Project. The developer was the Karaganda Promstroiproject Institute LLP.

In 2015, the work on the development of a feasibility study was completed.

In 2016, a loan agreement was signed with the Eurasian Development Bank.

In 2017, the first tranche was received from the Bank and construction and installation work began on the construction of the frame of the Main building of the enrichment plant.

In 2018, development of Basic Engineering for the project was completed.

In 2020, the Report “On the assessment of mineral resources of the Alaigyr deposit” was developed according to the standards of the JORC-2012 code. In November of the same year, an EPC contract was signed for the implementation of turnkey complex works on the development of design and estimate documentation for the Project and Working Documentation stages, the supply of equipment and construction of an enrichment plant, infrastructure facilities, a tailings storage facility and a circulating water supply system of the mining and processing plant for the extraction and processing of polymetallic ores of the Alaigyr deposit in the Karaganda region.

In 2021, under the concluded EPC contract, the supply of the main technological equipment of the concentrating plant began. A Feasibility Study Report has been developed with the calculation of mineral reserves according to the standards of the JORC-2012 Code.

Construction and installation works on the objects have been completed:

Project management is carried out by JV “Alaigyr” LLP, a subsidiary of JSC NMC Tau-Ken Samruk.